The event marking the thirty years since the introduction of the Jean Monnet programs at the Aristotle University of Thessaloniki, under the aegis of the Center for European Legal Culture, highlighted the role of Jean Monnet programs in promoting the values ​​of the Union as a coherent element. 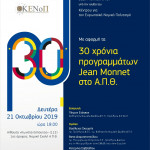 At the opening of the event the Dean of the Law School, Mrs. Elizabeth Symeonidou-Kastanidou,  expressed the  wish for  actions under the Jean Monnet Programs to be takenevery year. In his address, the Rector of the Aristotle University of Thessaloniki Mr. Nikos Papaioannou emphasized the importance of Jean Monnet actions in research, teaching and training, in dialogue at a scientific and social level, as well as in continuous renewal. He underlined the importance of highlighting common values ​​and a common perspective within the Union against the degradation trends and the Euroscepticism that contravene it. The event was also welcomed  through a video message by Mrs Themis Christofidou, Director-General of the Directorate-General for Education, Youth, Sport and Culture at the European Commission.

CELC ‘s  President, Professor, Petros Stagos,  spoke about Jean Monnet’s personality as well as the Programs  which originally  aimed at linking educational institutions with the Union’s financial goals and  how they developed into their current status.

The next speaker, Mr. Vassilios Skouris, former President of the EU Court of Justice and Professor Emeritus of the Aristotle University of Thessaloniki, in his speech on “Democracy and the Rule of Law as Fundamental Values ​​of the European Union” underlined the importance of the EU as a pioneer in the protection of human rights and the safeguarding of democracy worldwide.  Addressing the question of whether a European legal culture does exist, he referred to the human rights protection system established by the European Convention on Human Rights within the Council of Europe,  which offers the possibility of seeking redress individually.  Furthermore, the European Union, which relies on law and legislation, the supremacy and direct application of the Union law, has gone beyond any economic dimension and is based on establishing common values ​​that form its legal culture. He also considered as a “historic moment by chance” the non-inclusion of common culture in Article 2 of the Treaty on European Union which lists the values ​​of the Union. It should be noted that the Union promotes its values​​despite the decline of the rule of law in recent years, although there is no alternative, believing that the rule of law must be tackled and protected against authoritarianism.

Mrs Anna Diamantopoulou, former Minister and Commissioner of the EU, President of the Network for Reform in Greece and Europe, in her speech entitled “4th Industrial Revolution and the Education System” emphasized the role of technology in today’s times, the change that this has brought,  in the terms of work, ownership and investing in the digital age, using as an example the Airbnb platform, which employs thousands of people albeit without rights, such as insurance. She also emphasized that automation will increase jobs and efficiency in those countries that have been prepared for the change. She pointed out that we must accept the dilemmas and overcome them, referring to the poor performance of Greece in both the digital economy, services and businesses as well as digital education and employee skills, recalling that Lifelong Learning in the Digital Age should  belong to the new generation of Human Rights.

The event concluded with a speech by Ms. Katerina Savvidou, Assistant Professor of the Law School of the Aristotle University of Thessaloniki, on “Harmonizing the Tax Systems of EU Member States: Obstacles and Challenges”, which referred to the limits of European Union action in the field of taxation and the efforts to coordinate action against tax evasion. The importance of developments in this area in the Union’s fiscal governance and in the role of technology  was also highlighted. Current trade and modern trade within the Union, as well as outside it, are influenced by technology, giving rise to challenges that, if not addressed immediately, will result in billions in budget losses for both the Union and national governments.

Find the program in greek here.